aka “How not to train for a half marathon…”

another title could be “do as I say, not as I do…”

My third half marathon is in the books! I last ran the Marine Corps Half Marathon the year before, October 1, 2011, and finished in 2 hours 52 minutes and 23 seconds. The year before was crazy because I found out I’d lost my job (the company was closing) the day before.

So I recently learned that you can change the alarm on the iPhone from just saying “Alarm”. I know, I know… How does a geek like me not know this?? so.. now I use it ALL THE TIME. For example.. 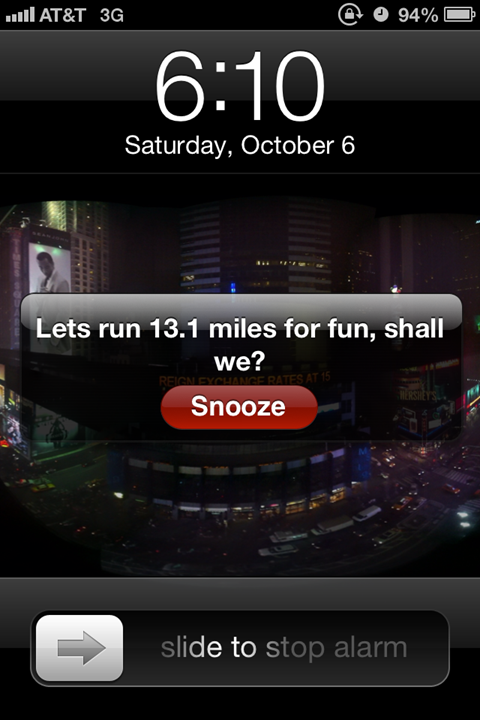 My first alarm of the day. My second alarm of the day is below. Surprisingly, I sprung out of bed on the first one, so this was actually unnecessary. Still fun to see it pop up as I was getting ready.

I drove down to the stadium and parked super quick. One trick I have is to take the Hart Bridge to get to most events at the stadium (including Florida/Georgia). I get off at the Adams Street exit (the one to the left by the jail) and then essentially just do a u-turn onto Forsyth and end up right by the Arena. It’s a quick way of beating all the traffic that usually gets stuck on Bay Street or the Mathews bridge.

When we got there, the first stop was to use the port-o-lets. For some stupid reason, all the port-o-lets throughout the stadium parking lot (the one’s they use for the Jaguar games) were all locked. The ONLY ones I could find that were open, had a REALLY long line. The ones at Met Park were also open, but I’m pretty sure they had lines too.

When I FINALLY made it through the line, I literally waited for the race to start about 2 minutes, and then we were off. I had NO time to warm up as a result. This is my fault for not getting down there sooner. Oh well. I already knew I wasn’t running this race for time. I was just hoping to finish before they started shutting down the race (which is about 3 hours and 30 minutes). Why? I hadn’t really trained well at all. Before, when I had trained poorly, I completed my long runs on the weekend but not my mid-week runs. THIS time, I was decent about the midweek runs, but hadn’t had a run over 6 miles. Yikes! 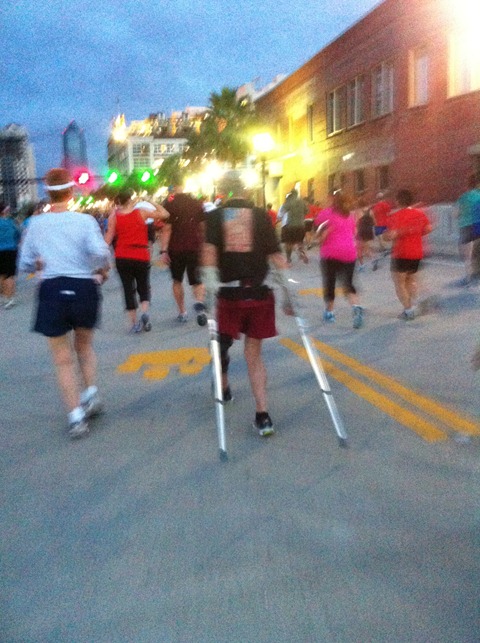 Not much farther down, I started hearing the marines cadence coming up from behind me.

Finally, it was split time. 5k or half?  Here’s my last chance…. at this time around 2 miles, I didn’t really feel that bad.

Throughout the race, I made sure to stop every half mile or so and stretch my calves out on a curb. Last year at the Subaru Distance Classic, I ended up dropping out due to Achilles Tendonitis, which I did NOT want to happen.

Now HERE is a smart water stop group. He had piles like leaves of water cups all gathered together thanks to his handy dandy rake.

I ran the race as a 4/1 interval. Run 4 minutes, walk 1 minute. Super easy, because all you need to do is remember to walk from 4-5 minutes and 9 – 10 minutes. Apparently I have a hard time doing math while running, so this is one of the few interval runs I can mentally fathom.

While the sky was a bit overcast, it really was a beautiful day out…if not a little…warm.

Seriously, look at that view of the Fuller Warren bridge. The clouds were just stunning…and then my iPod broke.

Finally I made it through to Avondale. The race is an out and back, so I had fun being able to watch the runners returning towards me and try and spot out my friends.

Just past Avondale, I ran past the best water stop of the day! Tootsie pop stop!

Right around mile 7 (across from Espeto Brazilian Steakhouse), I ran into my friend, Caron! She was headed out to breakfast, and just stopped to cheer on the runners for a few minutes. That was a much needed surprise and boost! 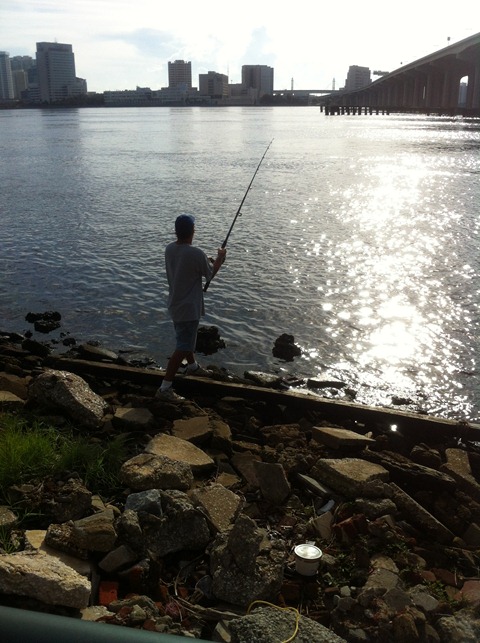 Around mile 9 or so, we turned and ran along the river. When I saw this guy, I thought of Adam who loves to fish. He should have gotten his butt outta bed that morning and fished while he waited for me! haha

By this time, the sun had burned off the previous overcast weather, and it was HOT. If I recall correctly, it was right around 80 degrees. Seriously, anything in the 70s is really too hot, especially for a half marathon.

The weather was deceiving, because it looked absolutely beautiful out.

We ran along the river right on the same path as the Krispy Kreme challenge from earlier in the summer.

And then, it was the dreaded bike path. Oy.

It’s always a good feeling when you see the first bridge you ran over towards the end of the race.

Along the riverfront, I was really hurting. My legs hurt.. bad. I was pressing on and by this time, switched to a 1/1 run/walk. Run one minute, walk 1 minute.

Love these statues because they mean I only had about a mile and a half left!

I have no idea how they caught me smiling.

Yeah, this is more realistic. 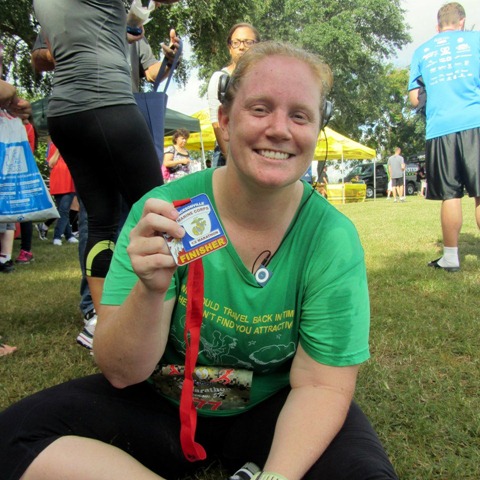 FINALLY FINISHED in 3 hours 16 minutes and 38 seconds! Absolutely horrible finish time. My worst time ever by over 20 minutes. I had serious moments throughout the race that I doubted this would ever happen. (Huge thank you to Becky & Tom for taking this picture. I was totally delirious at this point.)  I could blame my finish time on the heat, but really? It’s because my training was crap.

If I thought running the race was horrible, the days following were absolute torture. Because of my lacking in training, I was literally sore for about a week. REALLY sore.

Ok. Onto the next race, the Subaru Distance Classic Half Marathon on Thanksgiving….which I’m seriously training for this time! Lol

I would love to hear your thoughts! Leave a comment! Cancel reply

This site uses Akismet to reduce spam. Learn how your comment data is processed.